WP2 is further working on modelling the human-human interaction and the improvement of sensor algorithms (2nd CARTRE webinar) to detect the intentions of pedestrians. In WP 2.3 “Detecting interaction features and intention recognition development” led by BOSCH the partners are working among others on the motion prediction of pedestrians, facing the challenge that pedestrians can abruptly change their motion plans in less structured environments.

Progress on the AV core intelligence unit: the Cooperation and Communication Planning Unit

Recognizing the pose, the hand waving gestures, the anticipated intentions and the predicted behavior of the other traffic participants, the Cooperation and Communication Planning Unit (CCPU) develops an expectation-conforming, safe plan for the future motion of the AV and its interactions with the other TPs and its on-board user(s). The main objective for the past period was to develop the first working CCPU prototype to be integrated in the prototype CRF vehicle. Towards this purpose, the WP3 development teams have been working on the four CCPU modules, namely the Situation Matching, the Interaction Planning, the Trajectory Planning and the Safety Layer.

Findings of the observational studies in three European Countries

Implicit and explicit communication between Human Road Users takes place every day. As a basis for the design of AV behavior and interaction, we were interested to know more about how humans communicate in complex traffic environments and are happy to announce that we successfully completed the cross-cultural observations examining how Human Road Users (HRU) interact. The observations were carried out in three major European cities: Leeds (UK), Athens (Greece) and Munich (Germany). Five different approaches were used to generate the data, enabling a holistic view of interactions: Video recordings of traffic participants; Ground based LiDAR recordings; observation protocols, Questionnaires and an in-vehicle study, in which drivers’ eye gaze was recorded.

The interACT project aims to develop overall interaction strategies to control the interaction between the AV and the on-board user as well as between the AV and other TPs in the surrounding. During the last months we had several discussions within the WP 4 design team to come up with the preliminary interaction strategies for the interact must-have use cases. These are documented in Deliverable D1.1.. The interaction strategies include the first answers to the main question of what messages should be transferred and are significantly influenced by the results on the Human Road User observation of WP 2. After two design workshops and several phone conferences, we came up with three different design variants; these are the perception-signalling design, the intention-signalling design and a combination of those two. Those are documented in Deliverable D4.1 .The information can be transferred either by existing or new external and on-board HMI elements as well as by vehicle movements.

Our best wishes for happy holidays! 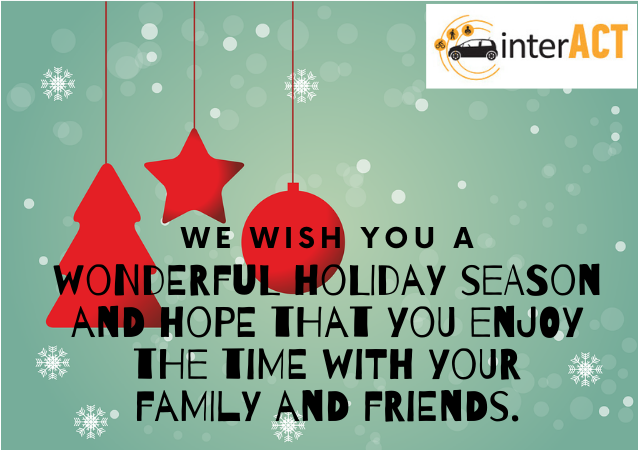 The 4th @interACT_EU #newsletter issue is #out 📨& we invite you to #read about the latest project developments and… t.co/2kTwThBZ1w

This website uses cookies to keep traffic statistics for reporting reasons. Please choose to accept these cookies to help us in our reporting.Accept Reject Read More